On Being A Person In Public

An author recently penned a very personal short article on Groupthink that both resonated with, and offended many readers. The piece is titled, “Being A Woman In Public,” and details one female-bodied person’s experience on urban public transportation. The article is controversial because at its core, it expresses the danger, discomfort, and weight of the male gaze that women endure constantly in public places.

“You can see him in your peripheral vision and you can feel him looking. You’re at a distance, but your hair is pretty bright and you’re wearing lipstick so you know he noticed you. Keep reading, keep looking down. He keeps looking at you…You exhale when an older woman rushes to take the seat you’ve vacated. You’re safe and insulated by the window now…It’s only been a few minutes, but this is what goes through your head when you’re existing as a woman in public.” 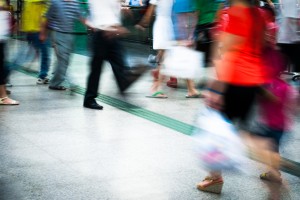 Cultural implications and norms can dictate our experiences in public.
Image: Shutterstock

She describes the experience of being female-bodied and how that connects to a feeling of vulnerability in a public space, an experience shared by countless women on a daily basis. Street harassment is an indisputably problematic facet of daily life, particularly in urban environments, and its unfaltering presence contributes to a society where rape and sexual assault permeate cultural norms. Some scholars and activists call this a “rape culture,” because of the way that assault and violence, particularly aimed at women, is normalized through public discourse and media.

While “Being A Woman In Public” speaks to the ongoing issues that face female-bodied people in daily life, it also oversimplifies a gender problem that intersects constantly with issues of race and class. Article commenters who were angered by her reaction to the man’s gaze may have felt personally targeted because they don’t identify with a culture that victimizes women. A story that comes to mind when reading the author’s is an open letter written by Ahmir “Questlove” Thompson of The Roots in response to the Trayvon Martin tragedy.

In the article, Thompson discusses the implications of being a male person of color in public spaces, detailing an experience he had on an elevator with a white woman who was visibly uncomfortable sharing the space with him. Thompson self-identifies as “exotic-looking — six-foot-two, 300 pounds, uncivilized Afro, for starters” and is all too familiar with the fear and racism directed at people of color. In the case of the elevator incident – a shared public space that was in his own apartment building – Thompson detailed his shameful, sad reaction upon realizing the woman’s unease was a direct result of cultural implications that deem people of color in public spaces “dangerous.”

When examining both stories side by side, only one thing is for certain: being a person in public has intense political, racial, and gender-based implications for every individual. It is critical to pay mind to these differences and the issues they spark to eradicate the fear and shame that face people of all genders and races. What do you think about these two articles, and how does being a person in public impact you?