Handicapped? Not in His Eyes. 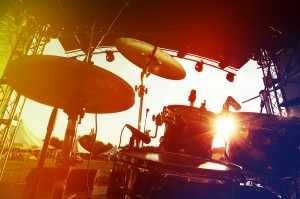 Dean Zimmer is one of the best drummers in the world.
Image: Shutterstock

If you looked at Dean Zimmer, you might think he had a hard life.  He happens to be in a wheelchair and has a somewhat gravelly voice.  His hair is long and wiry.  His teeth are not perfectly straight or white.  However, looks can be deceiving.

Dean Zimmer is one of the best drummers in the world.  The man can rock.  The native of southern California has opened for bands such as the Styx, Kansas, Thin Lizzie, Paul Rogers, Foghat and Eddie Money.

He once answered an ad that said “drummer wanted.”  When Zimmer arrived, he found the place was at the top of a flight of stairs with no wheelchair access.  Instead of giving up, he pulled himself up the stairs using just his hands!  When the guy opened the door, he didn’t see Zimmer right away.  That was until Zimmer called out, “Hey, down here.  I’m the drummer, and he looked at me like I had three heads or something.  He said, ‘You’re the guy?’”  Needless to say, Zimmer got the job.

When Zimmer, who has played drums for 30 years, plays, his whole body is engaged.  He shakes and rattles with the rhythm of the drums.  You can tell how much he loves it.  His tight musical talents are a direct result of the limitations on what he can do.  Because of the way his body works, he hits the same spot on the drumheads and snares every time.

His band mate doesn’t consider him to be handicapped.  However, Zimmer has arthrogryposis, which is a rare congenital disorder that makes it difficult to move his joints, according to the Los Angeles Times.

“He is not handicapped.  He is different.  He has the most patience in the world, and he can do anything anyone else in the world can do.  It just takes him longer,” said his band mate.

Yet, when asked about formal music lessons, he admits he has had none.  Zimmer says he just started playing on his legs and eventually moved to the drum set.  His school didn’t even have a single music class.

The next time you see a guy you think may be down and out, remember Dave Zimmer.  His joyous and “can-do” attitude is an inspiration to us all.

“Play from the heart, man,” Zimmer says in a video about him and his band tour. “That’s about all I ever knew.”