Kathrine Switzer & The Joy of Running

Some might say it’s dangerous after this year’s violence at the Boston Marathon.  However, it used to be considered dangerous for women for different reasons.  Some used to believe too much exertion could injure a female’s body, and women were not allowed to run.

Today, we laugh off those old-fashioned notions.  Women are now stars at nearly every imaginable sport.  We have Venus and Serena Williams tearing up the tennis court.  Sue Bird can dunk with the best of them.  And so on.

Most of the runners were supportive about having her run.  However, at one point, a bus with all the race promoters pulled up alongside her.  A man jumped out and yelled at her.  “Get the hell out of my race and give me those numbers!”  It turned out to be Jock Sumple, the race director.  He literally tried to grab the race numbers off her back.  All of a sudden, Switzer’s boyfriend ambushed him and threw him off the track. 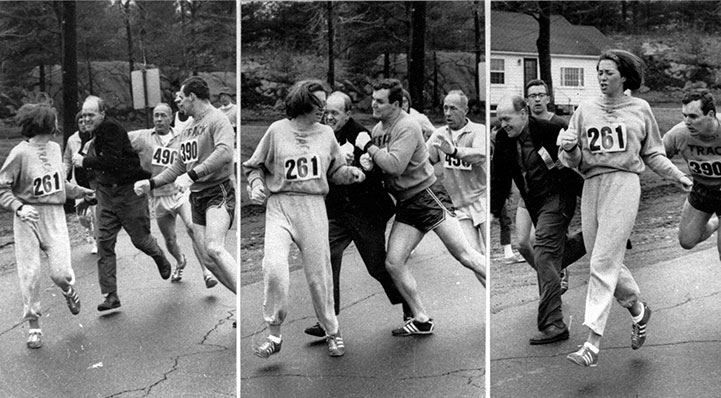 The press was shocked and tried yelling questions at her.  “What are you trying to prove?  Are you a crusader?  Are you a suffragette?”  Switzer replied, “No.  I’m just trying to run.”

She told her coach that, no matter what, she would finish the race.  Otherwise everyone would say that women weren’t strong enough for a full marathon.  She finished in four hours and twenty minutes.

She was driving back home when she and her boyfriend pulled over for snacks.  They glanced at a rack of newspapers and her face was all over every edition.  They had headlines like “Lady With Desire to Run Crashed Marathon.”  At that moment, she realized what a milestone her participation really was.  It changed her life.

Switzer went on to become an activist for female runners and successfully campaigned to add a women’s marathon to the Olympic Games.