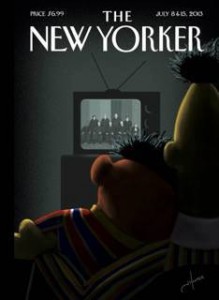 The New Yorker is no stranger to publishing political, compelling content often fraught with controversy. In the wake of DOMA’s demise, and momentum in the Gay Rights Movement, the popular publication recently featured a cover that sparked instant controversy, made many people cheer, and also ignited unavoidable homophobic responses.

The cover art, named “Moment of Joy,” features an image of Sesame Street characters Bert and Ernie, cuddling on their couch, watching the Supreme Court decisions on DOMA and California’s Prop 8. It evokes nostalgia for the iconic duo and their roles on wholesome, wonderful Sesame Street, as well as a bit of intrigue regarding the political and social intent behind the image. The cartoon is entitled “Moment of Joy,” and it portrays the gladness of two fictional characters juxtaposed with a very real, very momentous instance of joyful steps towards equality. Jack Hunter, who reportedly posted it to Tumblr before The New Yorker chose it for their coverage of the DOMA decision, created the cover art.

Bert and Ernie’s appearance on the cover of The New Yorker has been met with very mixed reactions. For some, the image is nothing more than a sweet, innocent depiction of the characters portrayed as a couple captured in their “moment of joy.” Others find it alarming, in that it sexualizes two characters of a children’s show, an opinion expressed by both gay rights supporters and those who deplore homosexuality. There has long been speculation about the nature of Bert and Ernie’s relationship, which many argue forces a sexual orientation on the characters in an instance where it shouldn’t. Sesame Street’s producers continue to insist that the duo’s relationship is strictly platonic, and that the characters are “best friends.” Bert and Ernie were created “to teach preschoolers that people can be good friends with those who are very different from themselves…they remain puppets and do not have a sexual orientation,” according to a statement made by Sesame Street about the pair.

The cover art clearly celebrates the peace and restored hope that many same-sex couples have found since the strike down of DOMA. What is your take on Hunter’s cartoon?