Hate crimes in NYC have disheartened many in the LGBT community.
Image: Shutterstock

Over the past month, hate crimes in New York City have been featured in the headlines a disturbing number of times, leaving New Yorkers feeling disheartened about their lack of safe spaces. However saddening this fact, it can be briefly alleviated by some wonderful news for the LGBT community and allies in NYC. Earlier this month, New Yorkers Carl Marucci and Drew Marsenison got engaged in Central Park, complete with a beautiful fountain backdrop, family present, and even a flash mob. That’s right, it was a flash mob proposal.

The carefully planned event was caught on tape, which reveals a small flash mob performing a choreographed dance to Christina Perri’s “A Thousand Years” for onlookers, including the couple and Marucci’s mother. After the song ended, the couple was led to the center of a circle formed by the flash mob. Once there, Marucci held his partner’s hands in his own, saying, “You are family to me, you are home to me,” before dropping to one knee and proposing. 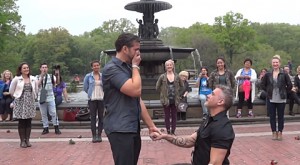 By now the crowd had grown significantly, and the proposal was met with emotional cheers and applause from the flash mob and other spectators. Marucci’s proposal shared with the whole world the love that he and his partner had. It was an immensely romantic and touching moment, and one that should inspire optimism for LGBT people in NYC, who are constantly striving for equality and safety in their communities.

For heterosexual couples, it can be easy to forget that showing love publicly, and even proposing in public is a privilege that not everyone shares. Marsenison and Marucci were literally surrounded by love and support during their big moment, creating a safe space that allowed them to celebrate their engagement with pride and joyfulness.