The Lake County School Board in Florida is considering new rules that would bar a Gay-Straight Alliance club from forming at Carver Middle School. Bayli Silberstein, a 14-year-old seeking to form the club, was denied last year and reapplied this year. According to her application, the club would be a place where people could be themselves and combat the everyday bullying that LGBT students face—which can be particularly harsh in middle school.

She has yet to hear a final decision from principal Mollie Cunningham. Bayli has been backed up by the American Civil Liberties Union, however. They say that schools cannot pick and choose which clubs are allowed to form based on what they think students ought to be discussing. Furthermore, it cannot permit the existence of one non-academic club but not another.

But school officials are now seeking to pass new rules, which would ban all extra curricular clubs from forming at either the secondary or just the middle school level. Of course, such strict rules would chance the extinction of clubs altogether, and even the school board members seeking a ban are concerned—though with a different viewpoint than we’d like: 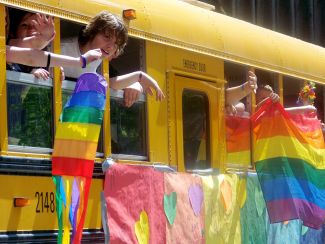 “I am very concerned that one club would push out the remainder of the clubs that are doing good things,” said Tod Howard, who is in favor of the middle-school-only club ban. If encouraging individuality and fighting bullying aren’t good causes, we’re not sure what qualifies in Mr. Howard’s mind.

In an ACLU-sponsored e-mail, Bayli urges supporters to sign a petition against the proposed measures. “We need a place where we can talk about the harassment my friends and classmates experience at my school,” Bayli writes. “All across the country, students like me are working hard to reduce homophobic remarks in the hallways that divide and hurt us, and fighting to create a greater sense of safety in schools. I’m proud to be a part of it.”