The World Reacts to Jodie Foster’s Coming Out 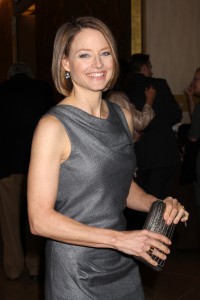 Sunday, January 13th was a big day for Jodie foster—for many reasons. First, she was awarded the Cecil B. Demille Award for lifetime achievement during the 70th Annual Golden Globe Awards. Foster, who just turned 50, has been in the acting business for over four decades. But Sunday was a big day for another reason—Jodie Foster came out as a lesbian.

“I guess I have a sudden urge to say something that I’ve never been able to air in public that I’m a little nervous about,” Foster said during her speech. “But maybe not as nervous as my publicist…

“So I’m just going to put it out there, loud and proud. I’m going to need your support on this,” she said. The room was silent as she spoke, and Foster was not the only one beginning to get a bit weepy.

“I already did my coming out about a thousand years ago, back in the stone age—in those very quaint days when a fragile young girl would open up to trusted friends and family and coworkers, and then gradually, proudly to everyone who knew her, to everyone she actually met.”

Known for being fiercely protective of her privacy, Jodie Foster had never before felt comfortable discussing the details of her private life in the public sphere. And though it became apparent to most that her speech was, indeed, her own version of Ellen’s “Yep, I’m gay,” some felt the actress should have been more straightforward.

“It was cryptic and defensive and we started thinking it was a joke,” said Diane Anderson-Minshall of The Advocate. “She sounded a little passive-aggressive to a lot of LBGT activists. This woman who obviously has been afraid to come out in the public sphere has been out in her private life for decades.”

Indeed, Foster’s words could have been perceived as more powerful had she been more straightforward—but her message was a strong one regardless. And for that, she had many cheering her on and getting teary-eyed as it became more and more apparent that she was, indeed, coming out publicly.

“When one of the most critically-praised actresses speaks about her identity and relationships on one of the largest stages in the world, it shows just how much the tide has turned,” Herndon Graddick, President of GLAAD said. “Given Jodie Foster’s lifetime of achievements, this is a significant moment for LGBT visibility.”