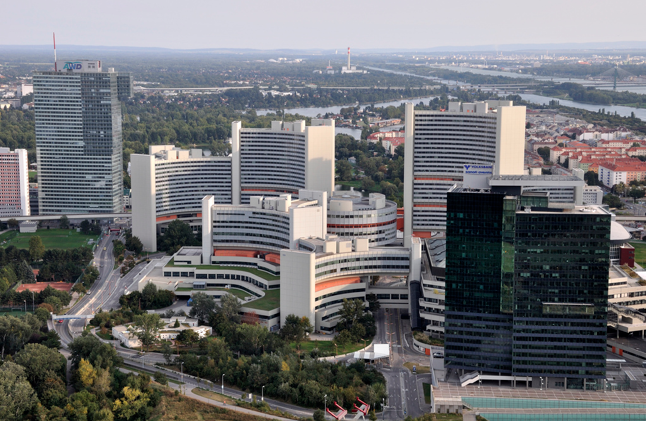 The UN Headquarter in Vienna.
IMG: Peter M via Flickr

Cameroon’s law makes it illegal to be gay, or even act “too gay.” Roger Jean-Claude Mbede is scheduled for a hearing on Monday, November 19, 2012, which will appeal his 3-year sentence. His crime? Sending another man a text message telling him he loved him.

Franky Djome and Jonas and Singa Kumie were sentenced to five years in September for dressing and behaving in a homosexual way. According to Gay Star News, the two men’s attorney Michel Togué said, “The judge gave the highest possible sentence to Franky and Jonas because their vocabulary was “feminine,” because they drank a beverage that’s perceived to be something gay men drink, and because the clothes they were wearing were not masculine enough.”

“Our country is throwing innocent people in jail just for being different and it needs to stop,” he said. And these cases are by no means isolated. They are simply a representation of what’s now become the norm in Cameroon.

It’s about time somebody stepped up to support these men and women being unfairly imprisoned and fined. And that’s exactly what the UN Office of the High Commissioner for Human Rights did.

“The UN human rights office is deeply concerned by reports from Cameroon of the harassment, intimidation, arrest and imprisonment of individuals on suspicion of being lesbian or gay,” a spokesperson said.

“The Government of Cameroon has a duty to end these abuses. It should provide adequate protection to human rights defenders working to protect the rights of LGBT persons.”

LGBT human rights defenders Alice Nkom and Michel Togué, who are defending the three men, have even received warnings and death threats if they attend the hearings. But rather than dissuade them, these threats have only strengthened their resolve.

“Threats like these show us that the fight must continue,” said Nkom. “If Cameroon’s leaders don’t end these anti-gay laws now, homophobic threats, violence and arrests will continue unchecked.”