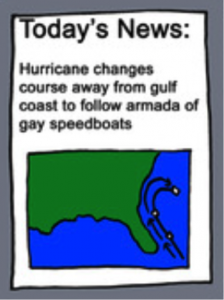 Comic from The Advocate

Superstorm Sandy has brought, once again, to light the fact that we—the LGBT community—are, in fact, to blame for many of the world’s disasters. In an article from the Advocate, there is a list of disasters that some were quick to blame on LGBT people. Of course, Sandy is just the latest disaster on the list.

“God is systematically destroying America,” John McTernan of Defend and Proclaim the Faith ministries claimed earlier this week. The biblical story of Sodom and Gomorrah is another example where God went a-wreaking havoc on two cities for participating in debauchery, mayhem, and sodomy.

LGBT people can also be blamed for the Northridge Earthquake of 1994 in the San Fernando Valley. According to Pat Robertson, the disaster was God’s response to the activities of gays, lesbians, pro-choice activists, and “perversity.” He had previously also blamed gays at Disney World’s Gay Days Weekend for Hurricane Bonnie in 1988 (which actually bypassed Florida).

Last year was a great victory for the LGBT community, when “Don’t Ask, Don’t Tell” was repealed. However, when we were suddenly hit with thousands of freak animal deaths—dead birds falling from the sky and dead fish appearing belly-up in water—Cindy Jacobs quickly blamed it on the repeal of the law. She also claimed that homosexuality was the cause of the Japanese Tsunami soon after.

“We have seen these disasters happen. We need to repent for turning away from God and saying that we can make any laws that we want, it doesn’t matter… that God’s laws don’t count.”

Similarly, Jay Falwell said of September 11th, 2001, “I really believe that the pagans and abortionists, and the feminists, and the gays and the lesbians who are actively trying to make that an alternative lifestyle, the ACLU, People for the American Way, all of them who have tried to secularized America. I point the finger in their face and say, ‘you helped this happen.’”

LGBT people have also been blamed for the Eastern U.S. Earthquake of 2011, Hurricane Katrina of 2005, and numerous floods, fires, and tornadoes in 2012.

“Although the loss of lives is deeply saddening, this act of God destroyed a wicked city,” Michael Marcavage of Repent America said after Katrina.

But it’s those with such hate in their hearts that are wicked, not us.