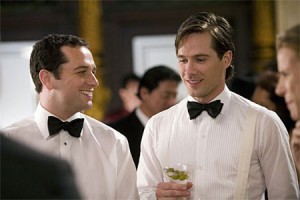 Do you ever feel like TV shows’ characters are just a tad bit unbelievable? Or perhaps that there is a strange lack of diversity among the types of people represented? There’s a good reason for that. Minorities have long been underrepresented on TV and in movies, and LGBT people fall into that category.

But, according to a study conducted by the Gay & Lesbian Alliance Against Defamation (GLAAD), that number is steadily rising and representation is the highest it’s ever been (at least on cable television). That makes watching your favorite show a bit more believable (and enjoyable), doesn’t it?

Representation of scripted LGBT characters on network television will hit 4.4% during the 2012-2013 Season. And since Gallup’s recent study found that about 3.4% of U.S. adults identified positively as LGBT when asked, the number of LGBT characters on TV shows seems closer to our own reality.

There are a number of TV shows you can tune into if you’re wanting to see a diverse set of characters, straight and LGBT alike: