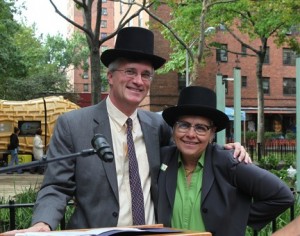 Margarita Lopez, the New York City Housing Authority (NYCHA) Commissioner, has long been an advocate for a number of causes—LGBT rights, ending domestic violence, homelessness, and environmentalism among others. An exemplary leader in the LGBT community, Lopez is the Environmental Coordinator for NYCHA’s green initiative, and has overseen partnerships with some valuable allies.

Planters, for example, joined Margarita Lopez and NYCHA last year in creating the New York City Planters Grove, which is a community garden and green park nestled within the Lillian Wald Houses on the Lower East Side of Manhattan. On the opening day of the park, Margarita Lopez spoke about reconnecting with and respecting our environment. “The roots of trees… go deep in Mother Earth to sustain all of our humanity,” she said. Chairman Rhea reflected a similar sentiment, urging us to remember that the earth is what sustains us in the long term, and we must do our part to take care of it.

NYCHA’s Planters Grove was the third in a series of green parks supported and built in 2011 as part of the “Naturally Remarkable” program created by Planters. The grove gives residents over 8,000 square feet of green park to use. And because it’s built right within a housing unit, it also supports PlaNYC’s goal of having no New Yorker live more than 10 minutes away from a park.

By being such a strong advocate for green living and sustainability, Margarita Lopez has played a large part in making sure partnerships like this come to pass. She is a truly exemplary leader who plays a vital role in so many causes—seeking to better humanity as a whole one project at a time.